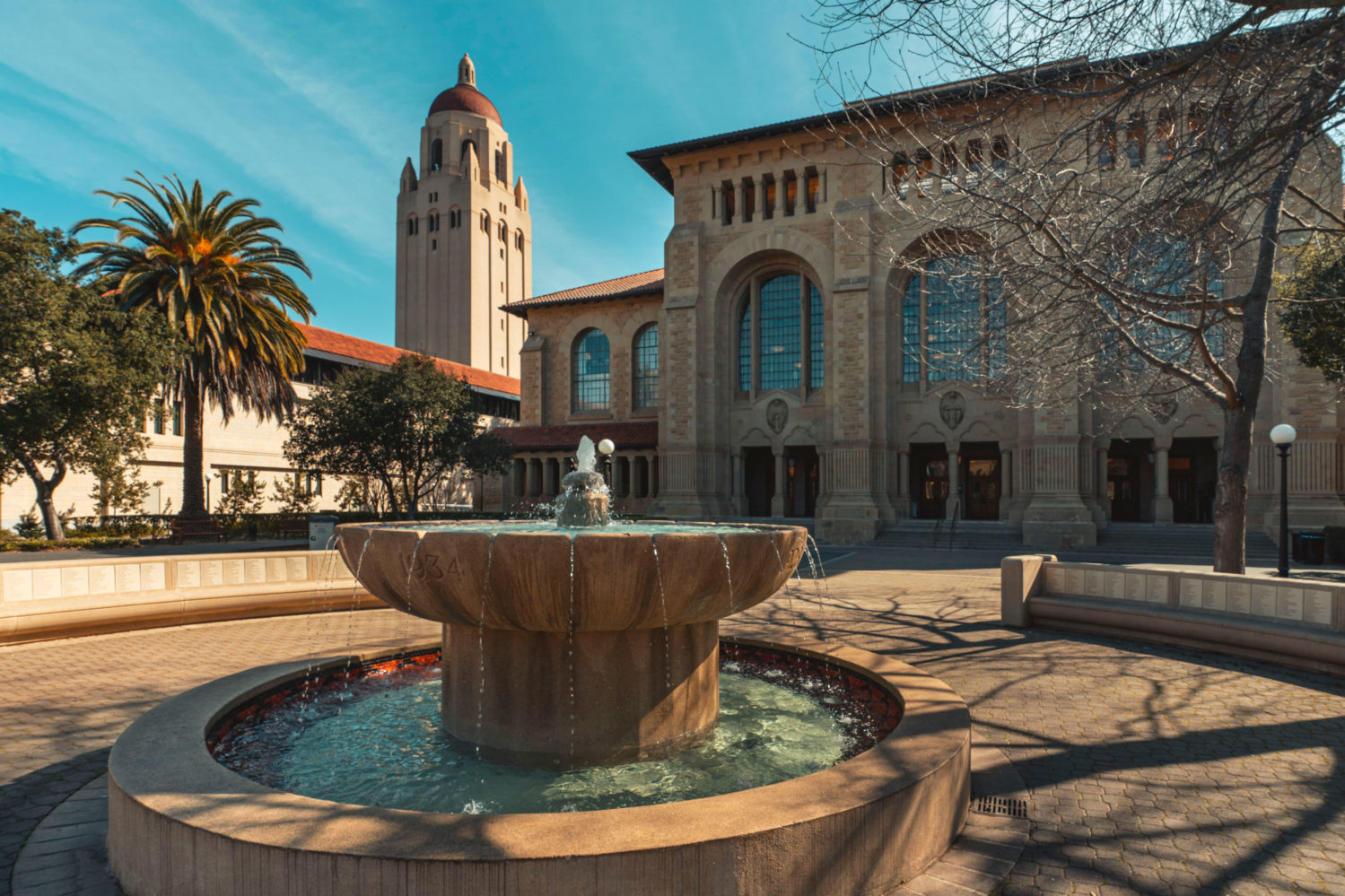 Stanford University was founded in 1885 by California senator Leland Stanford and his wife, Jane, “to promote the public welfare by exercising an influence in behalf of humanity and civilization.”

Stanford family
A portrait of Senator Leland Stanford, Jane Lathrop Stanford, Leland Stanford Jr. taken in 1878. (Image credit: Stanford University Archives)
When railroad magnate and former California Gov. Leland Stanford and his wife, Jane Lathrop Stanford, lost their only child, Leland, Jr., to typhoid in 1884, they decided to build a university as the most fitting memorial, and deeded to it a large fortune that included the 8,180-acre Palo Alto stock farm that became the campus. The campus is located within the traditional territory of the Muwekma Ohlone Tribe. The Stanfords made their plans just as the modern research university was taking form.

The Stanfords and founding President David Starr Jordan aimed for their new university to be nonsectarian, co-educational and affordable, to produce cultured and useful graduates, and to teach both the traditional liberal arts and the technology and engineering that were already changing America.

Their vision took shape on the oak-dotted fields of the San Francisco Peninsula as a matrix of arcades and quadrangles designed for expansion and the dissolving of barriers between people, disciplines and ideas.

Olmstead Campus Plan
The Boston firm Shepley, Rutan, and Coolidge collaborated with Frederick Law Olmsted to develop the university’s final architectural plan, with its distinctive arches, quadrangles and arcades. (Image credit: Stanford University Archives)
From the start, stewardship of the founders’ extraordinary land gift has helped support university endeavors, and has made room for a multiplicity of institutes, schools and laboratories that cross-fertilize each other with innovations that have changed the world. Computer time-sharing, the first isolation of highly purified stem cells and the first synthesis of biologically active DNA, among many other breakthroughs, all originated at Stanford.

The early years were difficult, however, as even the Stanfords’ wealth proved inadequate to their vision. After her husband’s death, Jane Stanford kept the fledgling university open through her leadership. The 1906 earthquake dealt a further blow, killing two people and destroying several campus buildings, some so new they had never been occupied.

University benefactor and trustee Herbert Hoover, future U.S. president and member of Stanford’s Pioneer Class of 1895, professionalized university operations in the 1920s and helped to put Stanford on a sound financial footing. He founded an institute to collect global political material – today’s Hoover Institution Library and Archives – and led the creation of the Graduate School of Business, both now world leaders in their respective fields.

Engineering Professor Frederick Terman, dubbed the “Father of Silicon Valley,” left his stamp by encouraging Stanford students not only to develop but also to commercialize their ideas. In 1937, physicists Russell Varian, Sigurd Varian and William Hansen developed the klystron ultra-high-frequency vacuum tube, paving the way for commercial air navigation, satellite communication and high-energy particle accelerators. In 1939, graduate students William Hewlett and David Packard developed the precision audio oscillator, first low-cost method of measuring audio frequencies, and spun it into the company now known as HP. In 1951, the university developed its Stanford Research Park to house firms led by such innovators. Varian Associates became the first tenants.

The Varian brothers
The Varian brothers and William Hansen with the klystron. (Image credit: Stanford University Archives)
The post-World War II era saw many research advances. In 1959, Stanford Medical School moved from San Francisco to the main Palo Alto campus. The 1950s also saw planning of today’s SLAC National Accelerator Laboratory, managed under license from the U.S. Department of Energy and opened in 1962. The first website in North America went online at SLAC 29 years later. Advances in particle physics developed at SLAC led to the Linac Coherent Light Source, whose ability to capture ultra-fast images of chemical changes at atomic scale has made it a global destination for pharmaceutical research. The Cold War also gave rise to “the Dish,” the radio telescope that is a familiar landmark in the foothills behind campus. The hill housing the Dish is a conservation area open to the public, and more than 2,000 people run or hike “Dish Hill” each day.

The Dish
In the foothills above campus, the Dish is a radio telescope built in 1966 and still in use today. The area’s trails are used by more than 500,000 visitors a year. (Image credit: Alex Webb)
Deep in the foothills beyond the Dish, a much smaller structure yielded epochal discoveries when it became home to the Stanford Artificial Intelligence Laboratory (SAIL), founded by John McCarthy and Les Earnest in 1965. SAIL researchers devised the first interactive system for computer design, as well as pioneering work on computer vision, robotics, laser printing and automated assembly. The world’s first office desktop computer displays appeared at SAIL in 1971.

In the 1970s, Stanford sought new ways to transform society and preserve the environment. It severed its links to classified defense research and forged new paths for service and stewardship. Stanford reduced its dependence on the automobile by adding campus housing and the free Marguerite shuttle, named after a 19th-century horse that pulled a jitney between campus and Palo Alto. The Jasper Ridge Biological Preserve was designated in 1973 to help preserve the green “lungs” of the Peninsula and access to the biological data compiled there that helped establish the field of population genetics.

The multidisciplinary Stanford Humanities Center, first of its kind in the nation and still the largest, opened in 1980 to advance research into the historical, philosophical, literary, artistic and cultural dimensions of the human experience. At this and 30 other humanities-related centers on campus, scholars ranging from distinguished undergraduates to mid-career fellows create new understandings of the world and humanity’s place in it.

From the start, Stanford has valued experiential education. Generous funding helps its undergraduates of diverse economic backgrounds to enjoy parity of experience and opportunity. In 2015, 85 percent of students received some form of financial assistance and 78 percent of Stanford undergraduates graduated debt-free. More than 1,000 undergraduates conduct faculty-directed research and honors projects each year, while 1,000 take part in public-service projects and 1,000 study overseas, all without regard for ability to pay. Since 1992, all undergraduates are guaranteed four years of on-campus housing, in keeping with Stanford’s emphasis on residential education and the experience of a small liberal arts college within the matrix of a large research university.

A significant physical transformation followed the 1989 Loma Prieta earthquake, which again challenged the university’s resilience and vision. Stanford’s main Green Library renovated its heavily damaged west wing as the Bing Wing, while the similarly damaged Stanford Art Museum reopened in 1999 as the Iris & B. Gerald Cantor Center for Visual Arts.

In 1985, the B. Gerald Cantor Rodin Sculpture Garden opened as the largest collection of Rodin bronzes outside Paris. It became the nexus for a world-class collection of 20th- and 21st-century sculpture, nearly all of it freely accessible to the public. Today, the museum and sculpture garden are part of a Stanford arts district that includes the Bing Concert Hall, the McMurtry Building for experiential arts learning and the acclaimed Anderson Collection of 20th-century American painting.

Anderson Collection
The Anderson Collection, which opened in 2014, is one of the world’s most outstanding private assemblies of modern and contemporary American art. (Image credit: Alex Webb)
The James H. Clark Center for Biomedical Engineering and Sciences opened in 2003 as the geographic and intellectual nexus between the schools of Engineering and Medicine and the home of Bio-X, a pioneering interdisciplinary biosciences institute led by Professor Carla Shatz. Its collaboration-friendly architecture set the tone for future building, furthering the interdisciplinarity that became a hallmark of university President John Hennessy’s tenure. The environmentally sensitive construction seen in the Clark Center, the Science and Engineering Quad, the School of Medicine and elsewhere fulfills the university’s deep commitment to sustainability in research, teaching and institutional practice. In 2015, Stanford Energy System Innovations’ electric heat recovery system joined the university’s solar and geothermal power procurement initiatives to reduce campus emissions by roughly 68 percent.

The Hasso Plattner Institute of Design at Stanford opened in the School of Engineering in 2005, bringing students and faculty from radically different backgrounds together to develop innovative, human-centered solutions to real-world challenges. Using techniques from design and engineering, the institute, known on campus as the d.school, instills creative confidence and draws students beyond the boundaries of traditional academic disciplines.

Development campaigns of unprecedented scope carry forward the Stanford family’s vision. The 2000 Campaign for Undergraduate Education raised $1 billion, while the Stanford Challenge concluded in 2012 after raising $6.2 billion, then the largest fundraising campaign undertaken by a university, to fund bold new initiatives. Meanwhile, the $1 billion Campaign for Stanford Medicine is rebuilding Stanford’s two hospitals for adults and children to advance the mission of precision health.

During 2016, Stanford celebrated its 125th year of transformational impact. A revamped Roble Gym opened with a dedicated “arts gym” to help make art an integral part of the student experience. “Old Chem,” one of Stanford’s first buildings, received new life as the Sapp Center for Science Teaching and Learning. The School of Humanities and Sciences launched the Humanities Core, a new certificate and minor program providing undergraduates a structured pathway to explore fundamental questions of human existence. That year, Stanford also expanded its Bing Overseas Studies Program, enhanced undergraduate research opportunities and played a pioneering role in exploring how best to use online technologies to expand access to high-quality education.