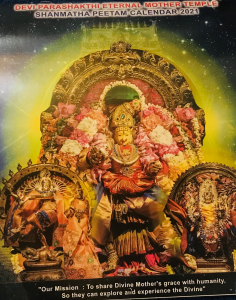 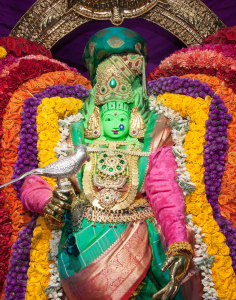 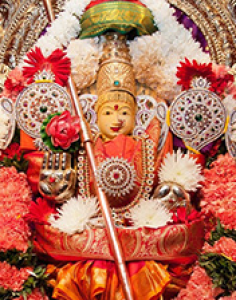 Parashakthi Temple, also known as Eternal Mother Temple is a Shanmatha (six paths in Hinduism) tirtha peetham (pilgrimage) in the west for Devi Adi Parashakti Durga worshipers situated in the heart of Pontiac, Michigan, United States. The Temple was built in 1999 and the inaugural pooja took place on Vijayadasami day. Since then, thousands of devotees have flocked to see Mother to shower Her with their love and devotion. Several devotees have experienced many miracles at the temple and throng every week to participate in the Abhishekams and other special functions that are conducted throughout the year. The Temple was envisioned by Dr. G Krishna Kumar in a deep meditative Kundalini experience when Goddess Adi Parashakti/Shakthi/Durga guided him to build a temple for “Her,” for peace, happiness and paramount success.

Divine Mother Parashakthi is “Divine Pure Eternal Consciousness” manifested as Shiva Shakthi and formed a Nada Bindu (sound and spiritual light), which separated into Shiva and Shakthi. All the gods and goddesses are her manifestations of various vibratory divine entities. At Parashakthi Temple, she is present as Parashakthi Karumari Ambika who is closest to the earthly creations. Devi Parashakthi is Kundalini Shakthi, which manifested as Prakrti (Shakthi), which together with Purusha(Shiva) has materialized into various universes (multiverse) as living and non-living entities through maya (illusion) Shakthi.

PRIMARY DEITY – PARASHAKTHI KARUMARI AMMAN – DIVINE ETERNAL MOTHER (HEART OF DIVINE LOVE)
Our Divine Mother Parashakthi is “Divine Pure Eternal Consciousness” who created and manifested as our universe. She manifested as Shiva Shakthi and formed a ParaBindu, which separated into Shiva and Shakthi. All the Gods and Goddesses are her manifestations of various vibratory divine entities. At our Temple she is present as Parashakthi Karumariamman who is closest to the earthly creations and is able to grant us divine vibrations. In this form, we, as separate “Atma” (individual soul) can communicate with “Paramatma” (supersoul) through Her which will ultimately lead to our union with Her by Her Grace.

PUJAS
Regular religious rituals for the deities, such as Pujas, Abhishekhams, and homams, etc., are performed by four well-qualified priests. The priests are also available for performing off-site religious services. Please contact the temple to sechdule pooja at 248-322-4731.

TOPOGRAPHY
The Temple is located on 16 acres of pristine land in a wooded area at the corner of Kennett Road and Sarasota Ave. in Pontiac. A small stream runs through the south end of the temple. There are Deer and other animals that inhabit the woods surrounding it. The temple has undergone a major remodeling which has resulted in additional space being added. Apart from over 6000 sq ft. of worship area, new space for offices, coat room, multipurpose hall for dining and holding religious events and talks plus a kitchen have been constructed. Together the built up area is about 10,000 sq ft.