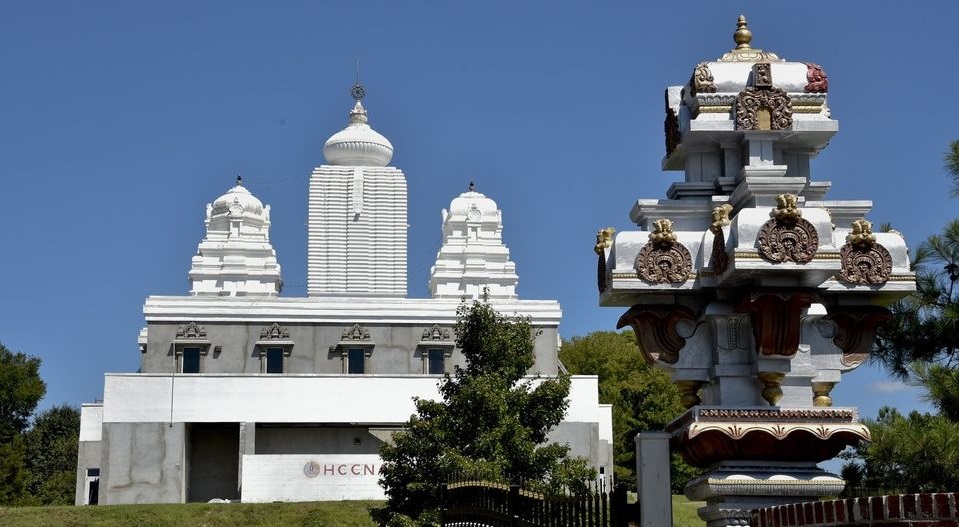 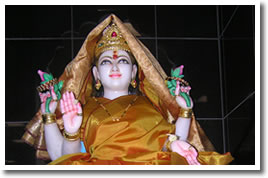 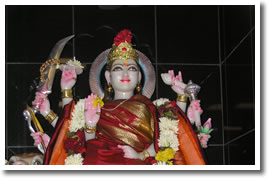 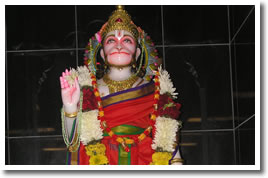 The Hindu Cultural Center of North Alabama (HCCNA) is a registered non-profit organization founded in 1995. Its mission is to promote spiritual and cultural upliftment for all relating to Sanatana Dharma and allied Hindu beliefs, while affirming the concept of global family. The current HCCNA Temple was consecrated in June 2005 and the deities were installed with an elaborate week-long Vedic ceremony conducted by priests and spiritually energized by Swami Dayananda Saraswati, Swami Viditatmananda and other religious and community leaders. The deities installed in the first phase are Lord Jagannath, Balabhadra and Subhadra in the center as you enter the temple, Lord Ganesha on the left side and Lord Venkateswara on the right. Other deities were installed on all three sides of the temple in 2006 and later in elaborate Vedic ceremony. The deities were Ganesha, Durga, Karthikeya, Sri Mahalakshmi, Radha Krishna, Sri Saraswati, Ram Parivar, Navagrahas, Shiva Parvati (Lingaraj), Kali, Hanuman, Durga, Lords Mahavir and Parshwanath and Lord Buddha.

The HCCNA Temple now has huge space for praying and religious discourses. It also has a community hall, kitchen, dining facility and plenty of parking surrounded by beautiful landscaping. The community hall downstairs can be used as a social hall for religious and non-religious activities. It has a state of the art sound system and a commercial kitchen for social functions. You can also rent the community hall for special family functions.
ARCHITECTURE
The temple architecture in the Hindu tradition is connected to astronomy and sacred geometry. The temple is a representation of the macrocosm (the universe) and the microcosm (the inner space). The temple consists of inner sanctums in which the idols are housed, with space for its circumambulation, and a congregation hall. The sanctum is crowned by a tower carved by skilled artisans called Shilpi’s. The tower called Shikhara or Vimana is visible from a distance as a symbol of upward human aspiration and as a landmark of the temple.

A BRIEF HISTORY OF HINDU CULTURAL CENTER OF NORTH ALABAMA (HCCNA)
HCCNA was established in the Spring of 1995 and we have come a long way since then. HCCNA is a tremendous source of pride for the Hindu community in our area. We have a place to worship, perform religious services, and conduct various events geared towards spiritual upliftment. This article highlights the major events that took place since the inception of the HCCNA.
Deity Installation
After the establishment of the Institution, an old church was bought in the Capshaw Community which is currently known as “Old Temple” and also serves as Priest Quarters. The first Prana Pratistha of the deities in the “Old Temple” took place in 1997 and all rituals including regular Sunday worship were performed there until the new temple, “Sarbajana Mandir” was built. “Prathameshti Shila Utsava” (Brick-Laying Ceremony) was held in May,2001 under the guidance of Swami Viditatmananda of the Arsha Vidya Gurukulam. After the completion of the construction of Sarbajana Mandir, the first phase of Murti-Pratisthapana was completed in June of 2005 when the three main deities (Lord Jagannath, Lord Ganapati, and Lord Venkateswara) were installed under the guidance of Swami Dayananda Saraswati of the Arsha Vidya Gurukulam and in the presence of dignitaries from all over the world. The Vishnu Way, the road leading to the temple was inaugurated in 2002 by then Ambassador of India to the United States, Mr. Lalit Mansingh. The second phase of Murti-Pratisthapana was held in June of 2006 when Sri Mahalakshmi, Radhakrishna, Ram Parivar, Navagrahas, Shiva, Kali, Hanuman and Durga were installed under the guidance of Swami Viditatmananda of the Arsha Vidya Gurukulam. The third phase of Murti-Pratisthapana was held in June of 2009 when Lord Mahavir, Satyanarayana, Buddha and Goddess Saraswati were installed. In subsequent years, Goddess Vimala, Lord Kartikeya and Lord Saibaba were installed.
Spiritual Retreat
Since the inception of the temple, many spiritual discourses on Hindu Scriptures and Philosophy were given by well renowned spiritual teachers like Swami Dayananda Saraswati, Swami Viditatmananda. However, the first Spiritual Retreat was arranged in 2009 when Swami Shantarupananda, Swami Yogatmananda and Swami Sarvadevananda of Vedanta Society conducted a 3-day program on various aspects of Sanatana Dharma to several hundred members of the community. Since then several spiritual retreats have been held featuring renowned Swamis including Swami Ishatmananda, and Yogatmananda of Vedanta Society, Swamini Svatmavidyananda and Siddheswari Devi (Didiji).
Cultural Program
In the last twenty five years, HCCNA arranged numerous cultural programs featuring renowned artists from India and the United States. Some of the notable cultural programs are mentioned here: Yesudas, famous vocalist from India performed during the first phase of Murti-Pratisthapana; Shri Kartik Seshadri, the foremost disciple of Pandit Ravi Sankar performed during the second phase of Murti-Pratisthapana. In recent years, Ustad Amjad Ali Khan, Bappi Lahiri and Kavita Krishnamurthy marveled the audience by their talent and exquisite rendition of music. These cultural programs go a long way in enabling us to raise money for the temple. Besides that, these events also bring our community together for a common cause.
Religious Activities
HCCNA celebrates all major Hindu Festivals throughout the year: Sivaratri, Ramnavami, Ratha Yatra, Janmashtami, Ganesh Chaturthi, Navaratri and Diwali. Srinivas Kalyanam is also celebrated once or twice a year. In addition, Satyanarayana Pooja, Kali Pooja and Kartikeya Abhisekam are performed every month. Jagannath Pooja, Shiva, Ganapati and Venkateswara Abhisekam and Sai Pooja are performed every week. HCCNA also celebrates Mother’s Day, Father’s Day and honor High School Graduates every year.